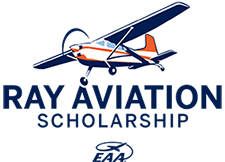 Will Coates, a 17-year old working toward his Sport Pilot certificate, has been awarded the Ray Aviation Scholarship by Experimental Aircraft Association (EAA) Chapter 166 in Hartford, Connecticut. He will receive $7,500 and mentoring support from Chapter 166 to help him on his path toward becoming a certificated pilot.

James Ray, who passed away on April 1, 2017 at the age of 94, believed the self-discipline and self-confidence he learned during flight training helped him achieve success in life and business. He felt strongly that these traits and assuming responsibility for one’s own actions are learned skills and important character traits that can make one free to pursue their dreams.

“The Ray Aviation Scholars program through EAA aims to meet two immediate needs — the growing demand for pilots and those in aviation careers, and the financial burden that often keeps young people from completing flight training,” said Chuck Ahearn, president of the Ray Foundation. “The pilot community found within EAA chapters is the perfect group to provide the support and mentorship that will significantly improve the flight training success rate.”

Check in here for updates on Will and his progress.

NEXT EAA CHAPTER 166 MEETING: SAT., June 25, 2022 AT 10:00 AM at Steve's Hangar at Hartford-Brainard Airport. Park at Emergency Gate 8 and someone will let you in. We'll be having a cookout - with ribs! Bring whatever else you'd like to share (or for yourself if you don't want ribs).

Chapter 166 will not meet in July. The last Saturday of the month?... you'll probably be at Oskhosh anyway.